skip to main | skip to sidebar

The Tata Nano is no longer the world's cheapest car! Jostling along with Tata Nano, this July, will be Tara Tiny and Tara Titu. These are zero emission, electric cars and cost only Rs 99,000! And they come from the Tara International stable.

Tara S Ganguly, the company's chairman and chief executive officer, had a big dream. And he set about realising it 'in a small way.' Tara International has teamed up with China's Aucma, a leading player in the electrical vehicles and appliances segment, to manufacture these cars. 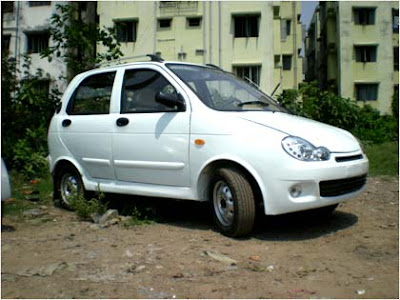 At the moment, four variants of electric cars are ready at the Tara International factory at Palta, a few kilometers from Kolkata. These are Tara Tiny, Tara Titu (two-seater and four-seater, respectively), Tara Shuttle, and Tara Carrier. While Tara Tiny and Tara Titu are priced at Rs 99,000 (approximately), Tara Shuttle and Tara Carrier are priced at Rs 500,000 (approximately).

The Tara series cars are available in electric red, black and white. Bikes comes in varied hues -- green, blue, red, etc. To know about the specifications of the car and see more pictures of the world's 'cheapest' car read on. . .
Posted by Abhilash.M.G.Poovathur at 10/21/2008 08:06:00 am

Abhilash.M.G.Poovathur
Manikkuttan (Pet Name) D/b : 04 April 1981 Body type : Average Height : 5' 7" Eyes : Brown Hair : Brownish Black My friends say I am a little sensitive and a little possessive. It can't say lie, and I don't think it's a fault to be a bit possessive about someone we love a lot and it's quite natural to be sensitive about them.